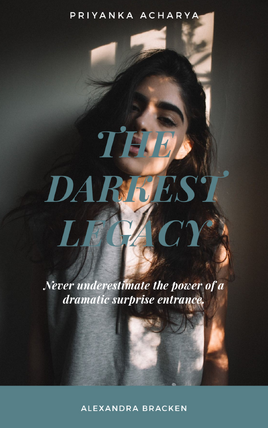 The Darkest Legacy
Priyanka is described as having brown skin, long legs, curly black hair, metallic-rimmed cats'-eyeglasses, full brows, high, slanted cheekbones, and wide eyes. She cares deeply for Roman and Zu and is usually very humorous. She has a romance prior to the book: her girlfriend was Roman Volkov's sister, Lana. Priya loves Lana and at one point in the book describes her heart like a wheel: "it breaks all the damn time but it always seems to keep rolling." She likes to make fun of Roman for almost anything and is never afraid to speak her mind.

Originally from New Delhi, India, Priyanka was born an only child. Her father left to find work in the US after she was born and she ended up being raised by her mother. As her father became a big crime boss in the US, he hired a private jet to fly Priya and her mother to America. The day before their departure, Priya's mother was killed in a car accident, and Priya went to the US alone. After arriving in the states, Priyanka was kidnapped by Mercer to be used for ransom to force her father out of the crime business. Instead of trying to save Priya, he showed up on television the next day and said, "I am mourning the loss of my beloved Priyanka", claiming she died of IAAN. She then worked for Mercer until she was 18 when she finally escaped with Roman.

Due to being experimented on using IAAN, Priya's powers are unlike that of other Psi's. Her power is known as Hacker, which allows her to enter all types of computers with her mind. She can use this power to alter programming, retrieve information, and shut down security measures. A side effect of these powers is that after using them too much, her adrenaline spikes and she risks having a stroke unless treated with proper medication.

Community content is available under CC-BY-SA unless otherwise noted.
Advertisement